• QTFairUse6 reaches maturity
• FairUse4WM, will anyone learn this time?
• MP3Toys, my favorite music player for Windows
• URGE+Zune
• Gapless playback on the iPod?

The latest effort to remove the DRM layer from iTunes Music Store purchased music, QTFairUse6, and its sibling GUI spinoff, myFairTunes6, have been kicking around for a couple of weeks now, but I'd say in the past few days they have finally reached maturity. They can now convert a .M4P protected AAC audio file to a .M4A AAC audio file at 6x real-time speed.

And unfortunately this ends up being just as exciting as FairUse4WM. Because the bad taste that DRM left in my mouth that led me to want to do this sort of conversion in the first place is now saying to me "save your 6x real-time minutes for something else: replace your <insert protected format> with a higher quality MP3 and NEVER worry about this again."

But at least iTMS songs have those sweet digital album covers.

FairUse4WM, will anyone learn this time?

If URGE+Zune doesn't fail for being more of the same, it will fail for URGE's clumsy interface (check out the 14-day trial to see for yourself). But in a smaller way, it will fail because Microsoft is fumbling with their DRM technology once again.

It looks like the cat is finally out of the bag on FairUse4WM, the latest user-friendly tool for stripping Windows DRM from protected WMAs. A month ago, I was fortunate enough to get to test it out before it was released into the wild. The idea of taking an unlimited song subscription for all it's worth should have been more exciting this time around, but I can honestly report a lack of enthusiasm after that first song was successfully stripped of DRM. Don't get me wrong, Vid Endtia has done some amazing work here. Cracking a DRM scheme and implementing your work into an app anyone can use is no small task. Maybe the fact that we've been here before is partly to blame.

But even more so, I was unenthusiastic about the whole thing because I can do better than millions of DRM-stripped WMAs each available to me almost instantly. I can get a -V0 VBR MP3 rip or lossless FLAC rip of any album in the MusicNet library, and well beyond that, just as quickly. USENET. Private BitTorrent trackers. I'll note that people gladly shell out money for them in the form of Usenet subscriptions and private tracker donations, because they offer what people want. They blow old-P2P out of the water, and they offer more than any legal digital music store. But how can any law-abiding company expect to compete with:

In the current copyright climate, they can't.

A few months ago while browsing Last.fm's plugins area, I noticed a player that I had never heard of with built-in Last.fm support, called MP3Toys. I gave it a whirl, became hooked, bought it, and 5 months later here I stand still glued to the thing.

The interface is leaps and bounds above any other music player out there. It is difficult to express this intuitiveness with cheap words; I can only ask you to test drive the beast. It is especially good for people who like albums over single tracks. It just recently began supporting FLAC files as well if you do the lossless thing.

Here are some screenshots I took of it in action since in my opinion the ones on the website don't do it justice.

It is developed by just one guy. He takes user feedback into heavy consideration, which has made the whole experience that much better, getting to see things I suggest implemented into the app. Try suggesting improvements to iTunes and see where that gets you!

Head on over to MP3Toys.net and check it out.

Imagine, if you will, a mentally handicapped man. In front of him is a wooden puzzle with triangular holes in it. In his hand he tightly grips a square block.

He tries to push the square block into a triangle slot. He looks to you for approval. When you shake your head, he pulls back. Then he sits there for five minutes. And then he tries again to put the square block in the triangular hole. This repeats ad infinitum.

This is Microsoft and almost every other major competitor to the iTunes Music Store so far. They all try the exact same formula to beat iTunes. When it fails, they wait a few months and launch another clone service. The same DRM-laden WMAs. The same MusicNet front end attempting to emulate iTunes. I really don't understand it.

I caught part of Dave Chapelle on Inside The Actor's Studio today. At one point, he said that America is the best country in the world by default, but it could be so much more. It is the same with Apple and music. They get to be the top dog because their service annoys users the least. There is still plenty of room for improvement that competitors should be taking advantage of.

Lossless FLAC/WavPack files really aren't that big. Ideally a service would sell DRM free music that played in any music device you could buy, and ideally it would be a lossless format that you could burn to a CD and have an identical copy of the original disc. But even selling MP3s would be an improvement (*winks at eMusic*).

I know I'm not saying anything new here, but this URGE+Zune thing is right around the corner and it is just more of the same. I see no reason why it won't meet the same fate.

Gapless playback on the iPod?

If you're willing to void your warranty, you can install RockBox, an open firmware for your iPod, iRiver, or a few others. With this new firmware you'll be able to enjoy things previously foreign to your iPod: gapless playback and support for extra audio formats. If you want to take it a step further, you can even change the whole look of the interface. Take a look.

A new version of foobar2000 was just released with a Media Library feature like the ones we've enjoyed for so long with Winamp 5 and iTunes. One treasured feature that seems to have mysteriously disappeared is the "Fix MP3 Header" feature that I used whenever iTunes refused to play an MP3. Hmmm.
EDIT: Looks like you can still make a keyboard shortcut to the Fix MP3 Header feature (mine is Shift+F). It just no longer exists in the right click menu.

While on the topic of ultra-lite ultra-leet players, I just found a player called Billy that, like foobar2000, plays MP3s perfectly gapless and is incredibly light on resources. Just as interesting as the player is the guy that produces it, SheepFriends. The simplicity of the apps is reflected in the visual and technical design on the site... drool.

The formula for the iTunes killer

One player. Mac, Windows, Linux. The technology is there, someone just has to build it.

I've been waiting for this ever since I first found out about XSPF playlists.

The Musicmobs project, similar to Last.fm/Audioscrobbler for those of you unfamiliar with it, just released the latest version of the software counterpart to their website, Mobster. In this version you can open someone's XSPF playlist and play your own copies of those songs. That means Person A creates a playlist with their songs, Person A sends playlist file to Person B, Person B opens playlist file and uses it to play their own copies of songs if they have them. This is exactly what the format was designed to be able to do. They also added a nice little bonus of taking you to the iTunes Music Store to get the 30 second preview if you run into songs you don't own. 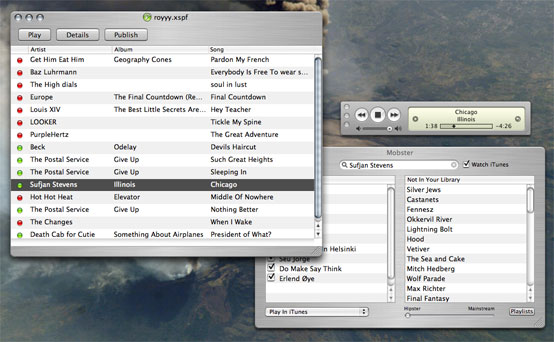 Right now only the latest Mac version has this capability. The Windows version will support it in the upcoming release.

Bleep is a digital music store that sells DRM-free MP3s from a bunch of independent music labels. They offer full previews of most of the songs in their catalog that pause every 30 seconds, requiring user interaction to continue the preview.

I've whipped up a little app to download the full preview versions of any given album. Look around Bleep for something you like, and once you find it, note it's release code (ie. WARP105). Type the release code into Bleep Hijack and load up the album information. You are then able to download the songs to your hard drive as MP3s. Downloading an album looks the same to Bleep as if you were just previewing music on their site. The MP3s are encoded at around 90kbps, so this is really just to give you a *taste* of the full album unless you don't care about quality.

DOWNLOAD Bleep Hijack 0.2 (22KB)
This program requires the .NET Framework 1.1. If you don't have it, you'll need to go to Windows Update and get it.

[EDIT: Since the posting of this, some things have changed on Bleep that makes "Bleep Hijack" not work as well as it once did. I have not updated the program because I'm not trying to hate on Bleep, it was more of a proof-of-concept exercise.]

If you have or have had an eMusic account, you might be bummed when you see them offering 50 Free MP3s for new subscribers and not you. No, you can't trial hop on one credit card until the end of time like you do with Napster. You need a miracle here.

Check your email for the offer or try this link (previous subscribers only). If you've never subscribed, you should check it out.