You can find the album artwork iTunes 7 downloads for your MP3s in a bunch of nested folders within "<your music folder>\iTunes\Album Artwork\" as .ITC files.

Here is a quick UNIX command to convert those album covers from the .ITC format to a usable JPEG or PNG.

tail -c+493 FILE_TO_CONVERT.itc > converted.jpg (or .png depending on the file format)

I wrote a shell script to take care of the dirty work. It takes a .ITC file as an input and outputs an image in its proper format.

Maybe you can incorporate the shell script into a script of your own that goes through each ITC and converts it!

[UPDATE: It looks like the guys over at Command-Tab were one step ahead of me! They even built a PHP art grabbing prototype. Check it out. http://www.command-tab.com/2006/09/12/itunes-art-redux/]

Since you can find it on a thousand other blogs right now, I won't go into all the neat stuff in the new iTunes 7. I will quickly say that gapless playback made me jump up and down. But onto the important stuff. Free album art is back, and not shady this time! 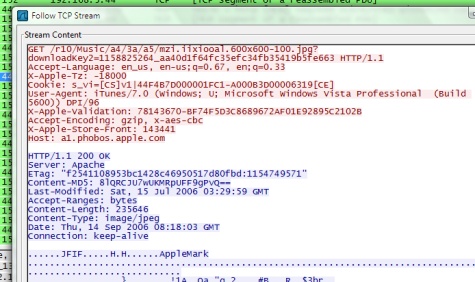 Look familiar?! Okay, probably not to many of you, but that is a packet capture of iTunes 7 downloading some free album art for me. They authenticate it the same way as they do with the art you buy with your songs! The "downloadKey" and everything! Well, this time "downloadKey2". Replacing the 600x600-100 with the lower increments brings up the thumbnailed versions once again.

But something strange is afoot here. This is not the same album art as I would get from buying the track. At least not with an album I have both copies of to compare with.

Copy of the album art that came with the purchased track:
mew-andtheglassBOUGHT.jpg (60.1KB) - 600x600

Copy of the album art that was downloaded for me for free by iTunes:
mew-andtheglassFREE.jpg (330KB) - 600x538

Two different high quality album covers for the same album. Why go through all the trouble? Is this a fluke? Does anyone have any of their own examples of this?

The latest effort to remove the DRM layer from iTunes Music Store purchased music, QTFairUse6, and its sibling GUI spinoff, myFairTunes6, have been kicking around for a couple of weeks now, but I'd say in the past few days they have finally reached maturity. They can now convert a .M4P protected AAC audio file to a .M4A AAC audio file at 6x real-time speed.

And unfortunately this ends up being just as exciting as FairUse4WM. Because the bad taste that DRM left in my mouth that led me to want to do this sort of conversion in the first place is now saying to me "save your 6x real-time minutes for something else: replace your <insert protected format> with a higher quality MP3 and NEVER worry about this again."

But at least iTMS songs have those sweet digital album covers.