FairUse4WM, will anyone learn this time?

I hope you album art addicts out there went on a rampage for these few weeks iTunes turned off their album art authentication, because they just flipped the switch back to the "on" position. I guess you can go back to cracking their encryption now!

Oh well. There is always Def.

But now I really need a UK iTunes account so I can go back to the [Drag to iTunes] + [.ITC + BitmapRip] method for the bigger UK copies of the art Def can't get.

Would anyone in the UK care to buy me a Ł5 gift certificate so I can make a UK iTunes account? :) That is the only way to do it without a UK billing address on your credit card. And yes, it has to be bought from a legitimate UK iTunes account. Trust me, I've poked! 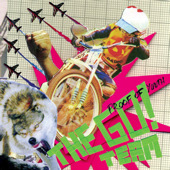 requirement 1: brain interface
requirement 2: nano machines that can fly and work together to lift things thousands of times their size

In 40 years, I WILL move things with my mind.

I'm using the term "threads" in the sense of threads in a forum. A different thread for each topic.

The beauty of this method of implementation is that it can be manually typed by someone without the proper plug-in. Thus the backwards compatibility.

As of the latest iTMS update, Apple is sending encrypted copies of their artwork to iTunes when you select "Get Album Artwork". The only people who probably noticed anything happened were those who used means other than iTunes 7 to get free artwork from Apple. This seems to only apply to albums released after the October 3, 2006 iTMS update.

A path to a cover that used to look like this:

After downloading the encrypted artwork, it appears that iTunes 7 decodes the image and saves it as usual to an ITC file, unencrypted. What method of encoding is used, I do not yet know.

[update]
Here are test files if anyone wants to join me in exploring this further.

The encrypted image is 20 bytes larger than the normal image.